Though she graduated from University of California at Berkeley in 1983, Shirin Neshat has emerged as an artist 10 years later, after her first visit to her native country Iran after 20 years absence imposed by the aftermath of the violent Iranian Islamic Revolution in 1979.

Her first body of works consists of dramatic narrative photographs comprised in the series Unveiling (1993) and the world-renowned Women of Allah (1993–97) that draw attention on the social status of women in the Islamic fundamentalist culture. Afterwards followed the trilogy video installations Turbulent (1998), Rapture (1999), and Fervor (2000) focusing on genre discrepancies within the modern society.

“In 1993–1997, I produced my first body of work, a series of stark black-and-white photographs entitled Women of Allah, conceptual narratives on the subject of female warriors during the Iranian Islamic Revolution of 1979. On each photograph, I inscribed calligraphic Farsi text on the female body (eyes, face, hands, feet, and chest); the text is poetry by contemporary Iranian women poets who had written on the subject of martyrdom and the role of women in the Revolution. As the artist, I took on the role of performer, posing for the photographs. These photographs became iconic portraits of willfully armed Muslim women. Yet every image, every women’s submissive gaze, suggests a far more complex and paradoxical reality behind the surface”, stated Shirin Neshat. Although the social position of women in the Islamic fundamentalist society is a recurrent theme in Neshat’s work, the artist approaches a variety of topics ranging from religion and violence to solitude or madness, themes reflected in her award winning films as Passage (2001) done in collaboration with the music composer Philip Glass, Mahdokht (2004), Pulse (2001), Tooba (2002) or Faezeh (2008). 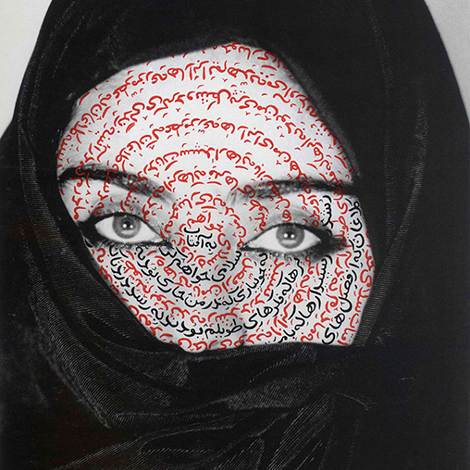